Steady job growth and low unemployment is generally seen as a good indicator of a strong and healthy economy. If one was to ignore the effects of Covid19 in the recent month or so, Australia has been a strong economy in the past few years, with steady employment growth. While other countries have been up and down, Australia has generally bucked the trend and kept on growing in a sustained period of employment bliss. 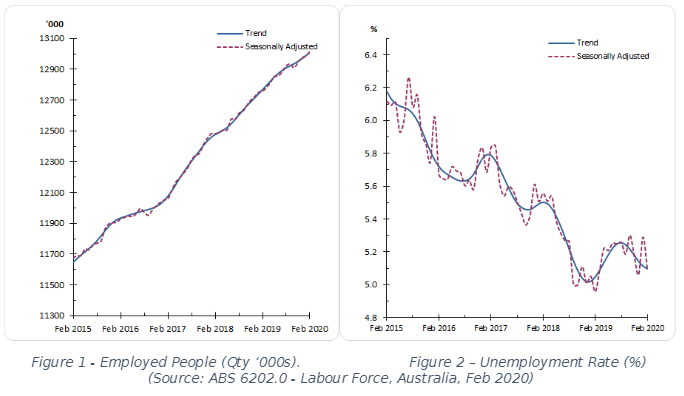 As can be seen in Figure 1 above, the number of people employed has been steadily growing, with no downward periods during the last 5 years. The graph shows the monthly growth in the Employed People increasing steadily from approximately 11,600,000 people in February 2015 to approximately 13,000,000 people in February 2020. Meanwhile Figure 2, shows the Unemployment rate dropping over the same time period. While the drop hasn’t been as smooth as the Employed People growth in Figure 1, it has still been heading in a downward trajectory. The graph shows the general downturn in the Unemployment Rate from 6.2% in February 2015 to as low as 5.0% in December 2018. In February 2020 the unemployment rate was at 5.1%. The unemployment rate is calculated by Number of Unemployed Persons / Labour Force. While these figures will never be 100% accurate, it is a great tool that economists and politicians use to determine the health of the economy.

While the data in Figure 2 looks very appealing, it is still important to note the trend over a longer period of time and see that things haven’t always been as positive. Figure 3 outlines the unemployment rate since 1991 until 2019, where the peak in 1993 had the unemployment rate at 10.874%, and the 2008 GFC saw a massive loss in jobs hit Australia hard after a much longer and better period of sustained job growth.

When it comes to employment segment of greater interest to GloTech, engineering (part of STEM; science, technology, engineering and mathematics) is in employment growth outpacing other occupations across Australia in terms of job growth. As technology develops at breakneck speed, be it the latest phone or 5G technology implemented around the country, the workforce required to keep up with the growing demands is ever expanding.

As can be seen in Figure 4 below, the growth of STEM related occupations is growing at almost double the rate of non-STEM occupations over a 5-year period, ending November 2019.

For people wanting a career in any STEM field, it certainly seems that being skilled and qualified in a relevant field would lead to more likelihood of gaining employment in their field of choice. Based on labour market analysis carried out by the Australian Governments’ Department of Education, Skills and Employment, the STEM jobs tend to be higher-skilled, relative to jobs across other industries. The department uses a standard, ANZSCO, which is a skill-based classification used to classify all occupations and jobs in the Australian and New Zealand labour markets. Based on those skill classifications, STEM occupations fall into the top 3 skill levels, as shown in Figure 5 below.

Unfortunately, all the data and information provided above is all information from Feb 2020 or earlier, before the COVID-19 pandemic outbreak currently ravaging the globe really took hold in Australia. It is having a devastating effect on all aspects of life, from the horrendous loss of lives, business closures, significant loss of employment across different market and strong social distancing measures being implemented by governments across the world and almost certain recession soon to hit Australian economy as well other economies around the world.

With the social distancing and self-isolation practices being enforced by the government, companies have had to shut down and stand down employees due to lack of business and poor cash flows. The hardest hit industries so far have been the hospitality, sports & physical recreation, hotels, aviation and even the real estate sectors. People are compelled to seek unemployment benefits being offered by the government. The federal and state governments keep coming out with new ways to help people survive, in what seems like daily announcements.

Already the unemployment forecasts being made by leading economists and bankers have the unemployment rate sky rocketing up to anywhere between 11-15%, from the 5.1% previously recorded. It could end up seeing similar percentage of jobless people since the Great Depression, much worse than it was during the GFC in 2008.

The Australian Government led by its Prime Minister, Scott Morrison, has come out with plenty of stimulus packages in an attempt to keep businesses alive and people in jobs. One of the most lauded announcements that has been announced was the $130 billion JobKeeper package. In this stimulus package, each company directly affected by COVID-19 will receive $1,500 per fortnight for 6 months for any employee that has been with the company for at least a year. It is potentially going to save around 500,000 jobs across the country and further heartache at a later date.

It is a strange time and a lot of people are doing it tough these days, and no one knows when this will all end, but one thing is for certain; we’ll be feeling the effects of COVID-19 in the economy for many, many years to come.